11 Authors Who Inspire My Journey

Ten practices of living wholeheartedly are the foundation of how I strive to live. Brene’s practices give me permission to be human, hang in there, and keep going with whatever I have completed across any given timeframe:  a day, week or month. The biggest win for me is letting go of being a perfectionist; I am shame-resilient. I have learned to lean into vulnerability and bring what I have each day to my pursuits. I am free to do what I want to do; the weights are gone!  When I wake up I get to design my path and build it. Whether I am doing financial planning or learning to be a better writer, I get to decide what I want. I get to help you do the same, too!

2. Paul Krugman - "Arguing with Zombies" Economics, Politics, and the fight for a better future.

Paul spells out clearly why some ideas should have died yet they keep shambling along like zombies.  Here is an excerpt From Part 10: Tax Cuts. "The Ultimate Zombie." The ultimate zombie is that tax cuts for the rich will miraculously cause the economy to improve and create jobs. The tax cut zombie has failed each time. Ronald Reagan passed a huge tax cut in August 1981. As it happens the nation was just entering a recession which sent unemployment to its highest level since the great depression. By late 1982 the economy began to recover.  The recession was more or less ended by monetary easing by the Fed.  In 1993 Bill Clinton raised taxes and conservatives predicted disaster.  Instead, Clinton presided over a huge economic expansion. It was tested under George W. Bush whose supporters promised a boom. What he got was lackluster growth followed by financial collapse. It was tested in 2013 when Barack Obama let some of the Bush tax cuts expire while raising some other taxes to pay for Obamacare, the economy just kept chugging along. It was finally tested by Donald Trump in 2017 amid promises of another economic miracle. Even as late as early 2019, the Trump tax cut was looking like a big fizzle. There were also tests at the state level.  In 2011 California and Kansas moved in opposite directions. California raised taxes amid cries from the right that it committing economic suicide while Kansas cut taxes promising an economic surge. As it turned out, California did fine, while Kansas ended up with a budget crisis and a vote by Republican legislators to reverse many of the tax cuts. In Short, few economic doctrines have been as thoroughly tested and thoroughly refuted as the claim that low taxes on the rich accomplish great things for everyone. Yet the doctrine persists. In fact it has tightened its grip on the Republican party to the point where almost nobody in the party dares to express skepticism. I originally saw the term Zombie ideas in an article about of all things Canadian healthcare, where it referred to false claims like the assertion that vast numbers of Canadians were constantly crossing into the United States in pursuit of medical treatment. As the article pointed out, this claim had been refuted many times, and should have been killed as an argument against Canada's health system. Instead however, it just kept shambling along, eating people's brains. Well belief in the magic of tax cuts for the rich is the ultimate zombie. And the truth is that it is not hard to see why it is proved it has impossible to kill. After all, think about who benefits from the persistence of the belief that low taxes on the rich are a great thing. All it takes are a few billionaires willing to spend a small fraction of their wealth supporting politicians, think tanks, or actually "think" tanks and partisan media will to spread the tax cut virus. That's easily enough to keep the zombies lurching along. Some of the articles in this section attempt to shoot those zombies in the head yet again. After all, one must keep trying. But here's the thing, the public has never bought into the tax cut message, polls consistently show that voters want the rich to pay more, not less, in taxes. And especially since the 2018 mid-terms, some democrats have been emboldened, once again, willing to propose taxes on high incomes and extreme wealth to pay for social priorities.

Elizabeth is the permission slip to pursue your creativity. She writes, “We all are creative beings...If you are not being actively creative, you are probably being actively destructive.”  She reminded me that I am creative (first as a builder, now as a planner and as I am practicing now to be a better writer).

My favorite advice from her is to “have an affair with your creativity.”  Paint your bicycle, write a book - do what you need to do to get out of your box and stand up, breathe, and be creative. If you’re stuck in your process, do something else. For instance, when Einstein had trouble with a math problem, he would go play the violin.  After a few sonatas, he would return with excitement and joy to solve the problem.

What feeds your soul? What gives your soul wonder? Sneak in 15 minutes where you can. The world needs your creativity and mine.

Malcolm asks, “What are you curious about? Build your expertise where you have interest.”

You can gain expertise in whatever you want to learn, but you have to put in your time.

As Gladwell writes, to become an expert you need 10,000 hours of “deliberate practice.” Bill Gates and Paul Allen had 10,000 hours of computer code writing experience before they were 18. Across 21 years, I built my expertise as a wealth manager building equity income portfolios using individual stocks. I did not start off knowing how to do this, but I learned.

In this book, the authors talk about how companies can be net positive and go beyond carbon neutral in numerous ways.  Using Unilever as an example, they started with having a diverse board, including people of color and at least half women.  They insist that everyone be paid a living wage, their suppliers are paying a living wage, and the harvest is sustainable for the ingredients they procure to make products.  Unilever convinced China and Russia to move from away from animal testing and harming.   Acting like a private company, Unilever has stopped focusing on the quarterly numbers.  They are a public company looking out for the betterment of the planet

Net Positive is the way of the future for companies to behave and treat their people, keeping Mother Earth and the people that work for them in mind.

Neil’s lectures deepen my connection with being a rational optimist (Matt Ridley, The Rational Optimist) and pique my curiosity. These lectures lay out the Big Bang until the end of the sun in 5 billion years and give me a new, broader perspective. Neil shares that the universe is vast, and we are the “proof of concept” of humans. There should be more life out there; and, if there is other life, it will be composed of the same elements we are, since the universe is made of these elements. This concept makes me curious to keep learning and be in love with these difficult, perhaps transcendent, questions.

John Quincy Adams’ entire life is inspirational. He proved that big things happen when you keep fighting if you have a vision for a better world. He fought for things that were not always in his best interest. For example, he kept fighting in a system where the slave owners had more power than they should have had. He wanted the world to be more egalitarian, a fair place for all.

This biography inspires me to keep pursuing “forward progress.” As I read further, I saw him as the example of Elizabeth Gilbert’s “stubborn gladness.” He fought and kept going, and he didn’t shrink back and hide in the corner. He pursued each day with the “arrogance of belonging (Gilbert).” This book reminds me that “Wow, things have been a lot worse!”

I’m working on adopting Greg’s practice of, “If it’s not a 9 or a 10, I don’t want to do it.”  I get to do what is essential in my life.  For instance, I can work only with people I want to work with.  I can define what matters.  What resonated with me is how he talked about work/life balance, and while I haven’t figured it out yet, I know I won’t figure it out just by working more. “It’s 5:00pm, what are you still doing at work?” is the question to ask myself. I believe it is essential to spend time reading and remember that this, too, is quality time.

I recently visited the private walkways that connected the Medicis old castle with their new castle so the emperor could move without walking through the streets (where he would have been killed). The Medicis hired Leonardo Da Vinci to create art for them. Leonardo did not want to work under pressure.  He did 50-100 versions of the Mona Lisa smile. Some of the work he created, such as The Last Supper, he did on materials that are falling apart because he continued to revisit, rework and improve the piece(s).

Although this heartwarming story comes from a place of sadness, Robin stays optimistic about the future. A botanist and professor, she describes planting the three sisters:  Corn, squash and tomatoes.  Even though they have different needs, these plants help each other grow. She puts forth what she learned from her Potawatomi ancestors that our greatest teachers can be animals and plants.

This story is really just about being nice; being nice to others and to our planet.

11.  Amor Towles, A Gentleman in Moscow. 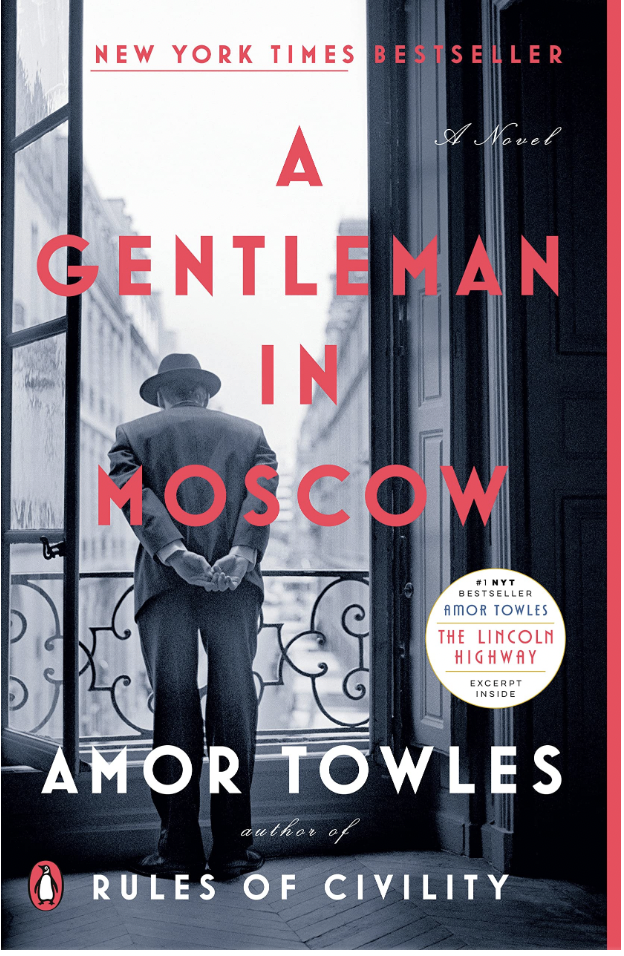 This is one of my favorite books of all time. The story of an aristocrat that might have been shot save his ability to read and relate to people. Instead, he is sentenced to house arrest in a hotel. Once he survived the Bolsheviks, he chose to thrive in the world where he was.

Here he uses all of skills to his advantage, whether it is a photographic memory or an ability to appreciate a meal with his incredible palette (which he could then recreate). Unlike the perception of a typical aristocrat, he was not arrogant or lazy. He was willing to do any job in the hotel and assist where needed.

What we can all respect and love about him is that he was able to think things through like a master chess player, not get frustrated, prepare, and be willing to take risks.  He paid attention to his world, and he connected with the people around him (the staff and the guests at the hotel). He was an incredible thinker and he solved problems by thinking them through and putting things into action. This intriguing and refreshing story is about helping others and making the most of your circumstances.

What books inspire you? Please email me at [email protected]